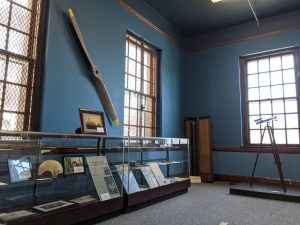 The regular lunch meeting of the Lebanon Rotary club on 7/1/21 was opened by President Davis with the 4-Way Test, a prayer, and the Pledge of Allegiance.

The meeting was held at Armstong Conference Center, and the club was welcomed by Harmon Museum president Michael Coyan.

Speaker – John Zimkus.
John presented documents from the Lebanon Rotary club’s history, and then highlighted parts of the Harmon Museum. He then led members on a tour of the Armstrong Gallery of Flight.

President Davis closed the meeting at 12:50 with the Rotary motto.

Here is a summary of the Lebanon Rotary Club’s regular lunch meeting on 6/10/21:

President Oda started the meeting at 12:20 with the Pledge of Allegiance, the 4-Way Test, a song, a prayer, and a toast.

She also reminded members that there’s still time to volunteer for the Country Music Fest this weekend.

Judge Kirby spoke about how he got the job, and what the job entails.

Q&A
Maggie asked: How do they reach out to parents before the kids get into trouble?
A: Judge Kirby wants to get together with parents in schools.

Rich Oeder asked: What repercussions do estranged parents suffer?
A: Practically none. Judge Kirby wants the ability to undo adoptions.

Rebecca asked: Are the cases in Youth Court mock cases?
A: No, they will be real cases.

President Oda announced our next meeting will be on June 17th, and adjourned at 12:58 with the Rotary motto.

Here is a summary of the regular club lunch meeting for 6/3/21:

President Oda begun the meeting at 12:20, after everyone had gotten their lunch, with the Pledge of Allegiance, song, prayer, and 4-Way Test.

Linda reminded members that the meeting on July 1st will be at the Harmon Museum. Lunch will be catered.

Also, the meeting on July 8th will not be at noon, but 3PM at the Warren County Jail. Lunch will NOT be served.

Tom talked about education during COVID, and addressed the issue of “critical race theory” in schools.

Linda Oda asked: Is the percentage of kids going to 4-year college still an important metric?
A: Some parents are realizing 2-year college degrees are helpful.

Rebecca Strole asked: Will schools change now that they’ve been practicing distanced learning?
A: No one will be doing remote learning, it has been “a disaster”.

Jack Hedges asked: Can you talk about the growth of schools in general?
A: It’s hard to say right now, because of the unique circumstances.

President Oda then adjourned the meeting at 12:58 with the Rotary motto.